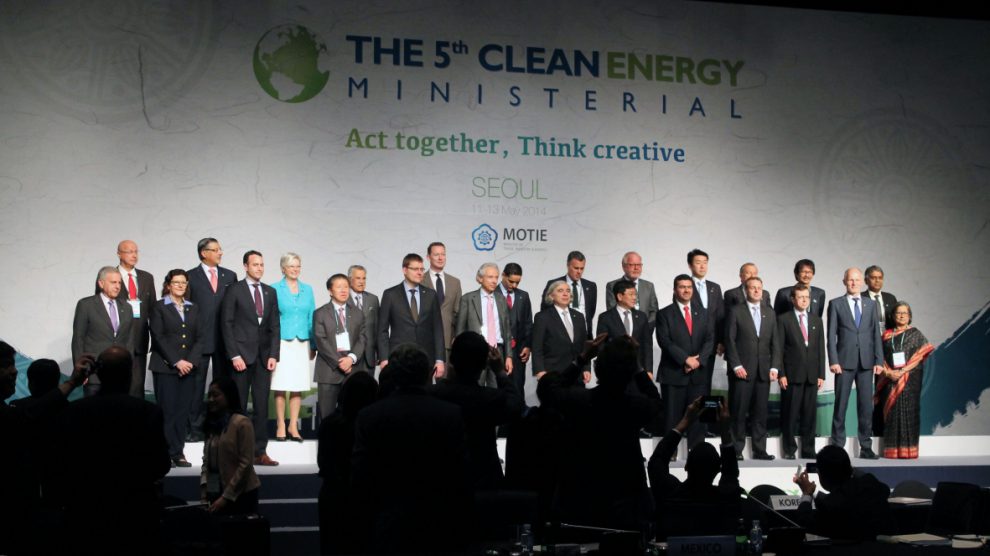 The Clean Energy Ministerial was announced at the United Nations Framework Convention on Climate Change (UNFCCC) ‘Conference of Parties’ in Copenhagen, 2009. The initiative came about after the failure of the summit to agree to any clear targets, and, as well as the Green Climate Fund, offered hope that meaningful progress could be made on an international level.

The initiative was announced by then-US Energy Secretary Steven Chu, and is described as a global forum for energy ministers and other high-level delegates from 23 countries and the European Union, “to promote policies and programs that advance clean energy technology, to share lessons learned and best practices, and to encourage the transition to a global clean energy economy“. This was the first renewable energy-specific global platform with a straightforward agenda: promoting renewable energy, energy efficiency and energy access. Importantly, the Ministerial also aims to engage commercial interests by providing a platform for partnership between the private and public sector.

In many ways, the creation of the Clean Energy Ministerial was borne of a previously existing lack of a single unified body to enable pathways towards UNFCCC treaty objectives and other agreed goals relating to clean energy provision. While the United Nations Framework seeks to set out legally binding targets on climate change, it does not possess the architecture to engage with countries ‘hands on’ in order to enable them to meet these objectives. Also, considering that much of UNFCCC law grew as an extension of EU law, it has been blamed for not engaging with a broader audience, as well as not holding the provision of enabling pathways for other countries to successfully implement recommendations, within its remit.

Essentially, the Clean Energy Ministerial is hoping to gather some of the many organisations as well as international government involved with the promotion of clean energy in advancing the goal of climate change mitigation, in partnership with trade and industry. This ambitious agenda has been relatively successful since its inception in 2010, although building on a well established support-base created by the European Union. The Ministerial differs from what could be considered a European effort in many ways, not least of which is the multilateral scope of the platform itself. Taking measures to fully engage with government ministers directly related to energy policy, the CEM has taken on a markedly collaborative role in joining forces with organisations such as the International Renewable Energy Agency (IRENA), the international organisation charting the path of renewable energy (as well as making philanthropic contributions around the world), and recently the International Energy Agency, whose documentation of the industry dates back to 1974.

In a further progression, the Ministerial announced at the Paris climate summit that it would be diversifying its role as a policy platform by the newly formed Mission Innovation; an initiative designed to pair government ministers with investors keen to join collaborative efforts to leverage capital and speed up clean energy technology innovation and adoption. This is significant, because despite the realisation that renewable energy is now an established industry revolving mostly around solar and wind, there are still a large number of hurdles to be crossed in order to reach the meaningful levels of emissions reductions necessary to keep economies on a stable 2°C path. Investor support and knowledge-sharing are fundamental to the effective adoption of clean energy technologies, and this is not a role the UNFCCC or any other organisation currently fulfils; namely because they do not possess the financial backing and direct government connection to initiate the type of progress necessary. Thus the Ministerial is taking on the role of government/industry mediator that has been so far absent or decidedly patchwork when considering the nuts and bolts of UNFCCC proceedings.

In this context; the goal of Mission Innovation is for each country to double government investment in clean energy innovation over five years, while also promoting transparency about its clean energy research and development efforts. This can be seen as similar to the EU Horizon 2020 programme which aims to utilise €80 billion over 7 years, although the MI goal is confined to energy only. So far, Mission Innovation has announced baseline research and development investments of nearly US$15 billion, with pledges to reach a combined US$30 billion per year by 2021. This will then be leveraged by private investments as orchestrated by the Breakthrough Energy Coalition.

Ultimately, this could reach amounts similar to the $100 billion annually that the Green Climate Fund are hoping to source from a variety of contributors.

So far, the achievements of the CEM are hard to quantify as it won’t be until significant capital is seen as being deployed by investor groups that the efficacy of the platform can be weighed up. Some of the initiatives launched by the CEM include the Electric Vehicles Initiative, the Global Lighting Challenge, 21st Century Power Partnership, International Smart Grid Action Network (ISGAN), the Clean Energy Solutions Center, a standards platform and database including ISO certification (with IRENA), and the Clean Energy Finance Solutions Centre, among many others. In some ways these initiatives can be seen as mirroring the European ‘Directives’ format, although the CEM have adopted a more multilateral approach, with the scale of ambition almost certainly matched by the global logistical challenge.

The CEM Secretariat have recently moved from their base at the US Department of Energy to the IEA headquarters in Paris.