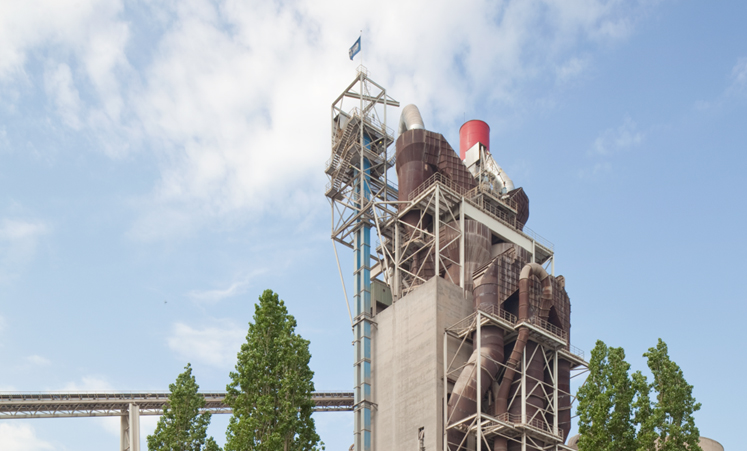 As businesses and governments around the world increasingly seek ways to limit emissions of carbon dioxide in order to reduce the risk of extreme temperatures, heavy industries such as concrete are steadily working to reduce their carbon output – however a number of outlying factors may influence mitigation pathways more profoundly than the options currently available – with the increasing likelihood that the industry may be able to reduce its emissions almost completely.

Concrete manufacture is responsible for approximately 5% of global carbon emissions (road transport is at about 18%), with about 50% of this figure attributed to the use of fossil fuels and 50% to the calcination of limestone, where carbon is ‘burnt off’ to produce calcium oxide, which is blended with other materials to form calcium silicates and other compounds to make cement.

Within Europe, the cement industry is lead by the consortium Cembureau who have recently published a report on the ongoing albeit minor reduction in CO2 output since 2005 in Europe as well as other Cement Sustainability Initiative (CSI) members worldwide; showing that progress is being made. This is followed up by Cembureau’s ‘Low Carbon Economy roadmap‘, which highlights 5 pathways to a 32% reduction of emissions compared to 1990 levels using conventional means, and a further 48% reduction using potential ‘breakthrough’ technologies which would bring emissions in line with Paris Agreement targets. This additional 48% reduction constitutes the bulk of the problem – but it seems as though a solution has emerged that looks capable of bringing about the changes needed in this vast industry to bring emissions down by 80% over 1990 levels – if implemented.

Firstly, to understand the constraints placed on the industry it is worthwhile noting the advantages of conventional cement manufacture. The required raw materials – mostly limestone and energy to reduce the limestone to lime ‘clinker’, is available almost everywhere. Factories are usually built next to quarries because its easier to transport the reduced weight of cement than the limestone itself. However, even before this stage, a number of alternatives are available. The first option is to substitute cement entirely by another binder – in an effort to reduce the 50% of CO2 emitted via the calcination process. And here we find that a number of materials may be used outright instead of conventional limestone. Generally, these materials are either Ground Granulated Blast-Furnace Slag (GGBS), produced as a waste material of the steel industry or Fly Ash, a waste material of the coal industry. These substances both act in the same way as powdered limestone clinker – containing high levels of silicates formed under extreme temperatures. These materials (known as Supplementary Cementitious Materials, or SCMs) are usually used in small quantities as an addition to the cement mix, but are increasingly used to replace the cement constituent of concrete entirely. An Irish company ‘Ecocem’ is now producing a concrete made using solely GGBS, with only 4% of the CO2 output of tradional Portland cement. This is because the material is classified as a waste product, and replaces both CO2 emitting processes required in limestone ‘sintering’; both energy use and reduction of calcium carbonate (limestone) to calcium oxide and CO2.

The problem with the use of these SCMs to substitute limestone clinker is that there are limited supplies around the world, and demand for low-carbon cement alternatives are increasing rapidly. Altogether, this leads to a situation where, as Cembureau lays out in its 5 point low-carbon pathways plan, alternative ways still need to be found.

However, the impetus to both reduce energy use and reduce CO2 process emissions has now been combined with another motivation – to make practical use of potential waste CO2 streams at scale, at an economic price point. This presents a compelling proposition: what if CO2 could be cheaply incorporated into the manufacture of binding materials making up cement – thus providing a revenue stream for the large amounts of CO2 available as a waste stream from many industries.

A number of companies have been engaged in solving this problem, and it seems as though the answer has been found; if it can be commercialised at scale, and within cost.

In a partnership that now spans a number of multinationals including LaFarge, BASF, Air Liquide and Totale, the US company Solidia Technologies have developed a cement alternative that reduces the end-to-end CO2 emissions of concrete by 70%, with higher quality performance, using CO2 rather than water to cure the mineral cement formula. From the Solidia website:

“Solidia Technologies® makes it easy and profitable to use CO2 to create superior and sustainable building materials. Solidia’s patented technology starts with a sustainable cement, cures concrete with CO2 instead of water, reduces carbon emissions up to 70%, and recycles 60 to 100% of the water used in production. Using the same raw materials and existing equipment as traditional concretes, the resulting CO2-cured concrete products are higher performing, cost less to produce, and cure in less than 24 hours.”

With the backing of the most serious industry players as investment partners, it is difficult to disprove the authenticity of the claims made. Solidia has begun commercialising its pre-cast products, which are being made available for sale in 2017. 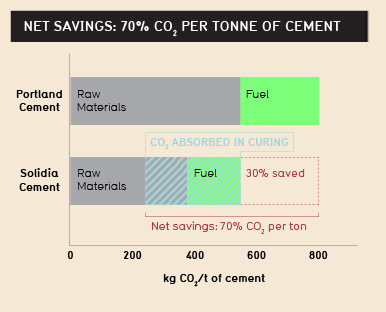 In reality, while the claims certainly present a great development for the industry, some limitations may appear when considering the industry as whole. First of all, it may be useful to consider recent research by the University of East Anglia which shows that in many forms, traditional cement materials represent a carbon sink over their lifetimes. As concrete hardens over years, it draws in CO2 in a process of carbonation. This means that the direct sequestration of CO2 by the new cement is actually playing a similar role to ordinary cement.

However, as developments unfold surrounding the sustainability of the concrete and cement industry, the reality is a price on carbon will greatly expediate the uptake of this technology. If a high enough price existed (about $30 per ton of CO2, as opposed to $5), the industry would be motivated to persue the technologies identified with greater urgency. It could be said that cement producers within the European ETS are at present in effect disincentivised to innovate, as the over-allocation of pollution permits actually generates a profit for larger companies, reducing competition and stifling the potential market for emerging low-carbon alternatives. However, this situation is likely to change in the longer term as excess permits are annulled and further allocations reduced in order to bring the carbon price back to a more functional level.

We can only hope that Solidia’s claims are backed up by strong sales figures, and that the industry is on a course for major disruption. But this can be greatly helped by a stronger carbon price, which many have been anticipating for some time, and would have the added benefit of locking in emissions reductions strategies across entire supply chains, and forcing established industries such as cement and concrete to innovate and make the investments necessary for a realistic low-carbon transition.